Hurtigruten voyages along the coast of Norway offer a comfortable way to see the Northern Lights in winter. Whether you choose to travel on one of the special Astronomy voyages or a classic voyage this winter, you will be in the contention for witnessing the unrivalled natural phenomenon that is the Aurora Borealis.

When travelling on Hurtigruten from September until April, and passing the Arctic Circle you will enter the Aurora zone. When travelling along the Norwegian coast by sea, you will generally be away from artificial light, which often (but never guaranteed) provides the canvas for spectacular displays. 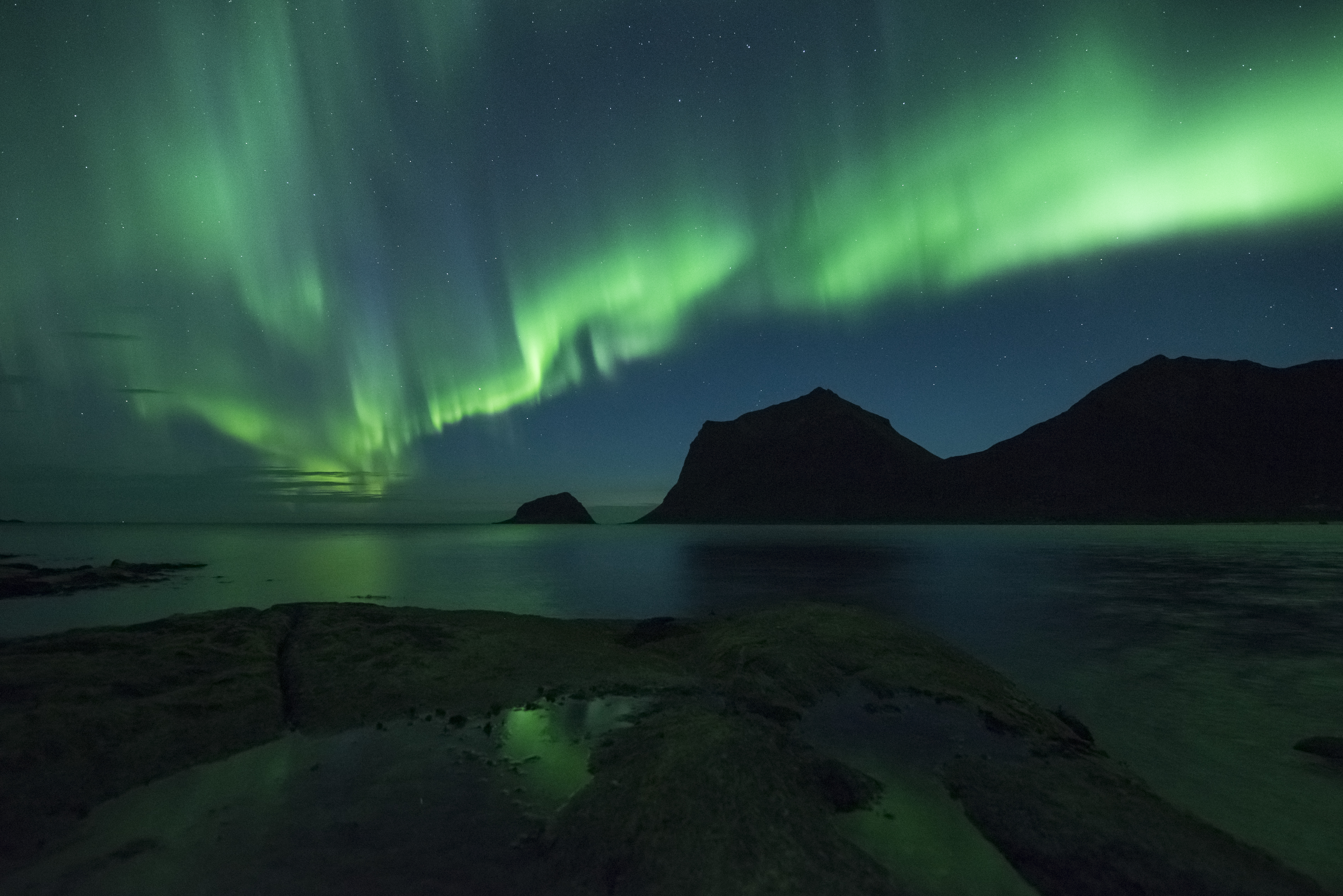 If you fall asleep early, don't worry; as Hurtigruten offer a 'Northern Lights alert’ when the lights reveal themselves. Hurtigruten also offers a promise that if your 12-day voyage doesn't see the Northern Lights, you will get a free 6 or 7 day voyage.

Note: Northern Lights Occurrence is defined as a sighting from the ship which is recorded by the ship’s deck officers and which is announced to passengers on board. An occurrence can last anything from a few minutes to a matter of hours, and the ships decision as to whether the Northern light occurred is final. Hurtigruten hope that you will experience seeing the Northern Lights whilst on your Classic Round Voyages cruise, although they cannot be held responsible if you don’t. Hurtigruten do however, promise that in the event of there being no Northern Lights Occurrence as defined above on your voyage, we will invite you back to cruise with us once more.

When travelling along the Norwegian coast in winter, you can join various excursions; such as a dogsledding adventure or a snowmobile trip into the frozen polar night. The landscape is covered in pure white snow, and the many villages and towns you pass by are picture perfectly nestled into the scenery. The Hurtigruten fleet has operated along the rugged Norwegian coast since 1893 servicing remote coastal towns where resilient locals have made their living.

The annual Hurtigruten coastal voyage program includes special Astronomy voyages each winter dedicated to the Northern Lights. Expert guest lecturers join each of these Astronomy voyages, and offer unparalelled insight into what you are witnessing. Included in these voyages is a visit to the Northern Lights Planetarium in Tromsø. There are approximately nine of these voyages scheduled for 2021 and 2022.

Guest lecturers on the Astronomy voyages:

Dr John Mason, MBE, is currently Principal Lecturer at the South Downs Planetarium in Chichester and is a sought-after speaker with an international reputation as an enthusiastic and entertaining communicator of science. Dr Mason lectures on the Astronomy Voyages with dates announced closer to the voyage departures.

Ian Ridpath has been a full time writer and broadcaster on Astronomy since 1972 and has previously worked at the University of London Observatory and in publishing. He has also investigated a number of UFO cases! Ian is the lecturer on the Astronomy Voyages - with dates announced closer to the departure dates.

Midnight Concert in the Arctic Cathedral

Fingers crossed, that staying up late for the Midnight Concert in Tromsø's Arctic Cathedral allows you the chance to see the Northern Lights. Listen to the sounds of Norwegian Folk songs as well as classical and sacred selections as the Northern Lights dance outside is a pretty cool way to spend the evening. This excursion is only during the Southward voyage.

Warming up in a Sámi tent

Enjoy a warm drink and a slice of cake in a traditional Sámi lavvo before experiencing the traditional way of Sámi transport through the Arctic landscape, being pulled by a reindeer sleigh. This is an overnight experience out of Tromsø which we can book for you. Northern Hurtigruten voyage. Our new Aurora Highlights tour starts in Tromsø and also includes a stay in Finland's glass igloos after the Hurtigruten voyage.

Sipping champagne in a hot tub

Take a glass of champagne with you out on deck to one of Hurtigruten’s on board hot tubs. Sailing through the breath-taking scenery covered in crisp white snow, the Northern Lights complete the perfect scene. Refer to our Hurtigruten fleet guide to find out which ship has a jacuzzi!

Dog sledging in the hills of Tromsø

Sitting two to a sleigh being pulled or taking turns driving the sledge. This three hour excursion is offered on the North bound voyage during winter and spring.

On deck with a hot coffee, a tripod and your camera

For the budding photographers amongst you, wrap up warm, set up your tripod and try your luck at capturing the elusive Northern Lights on film. A strong, hot Norwegian coffee will help keep your hands warm.