A stay at the Treehotel, Sweden

Barry Stone's love of treehouses as a child had him primed for his stay at the Treehotel. He travelled through Northern Sweden last September and brings to you an account of his experience, wandering reindeers, installing gas stoves and all!

It was late afternoon in northern Sweden, and I'd just finished helping the owner of Treehotel install a new gas stove in the communal kitchen of a local campground on the banks of the Lule River. Sure, not how I envisioned spending my afternoon when I first checked in, but when the man who created one of Europe's must-visit hotels, who travels the continent speaking on the virtues of sustainable architecture asks your help for anything, well, it makes you feel sort of . . . special. 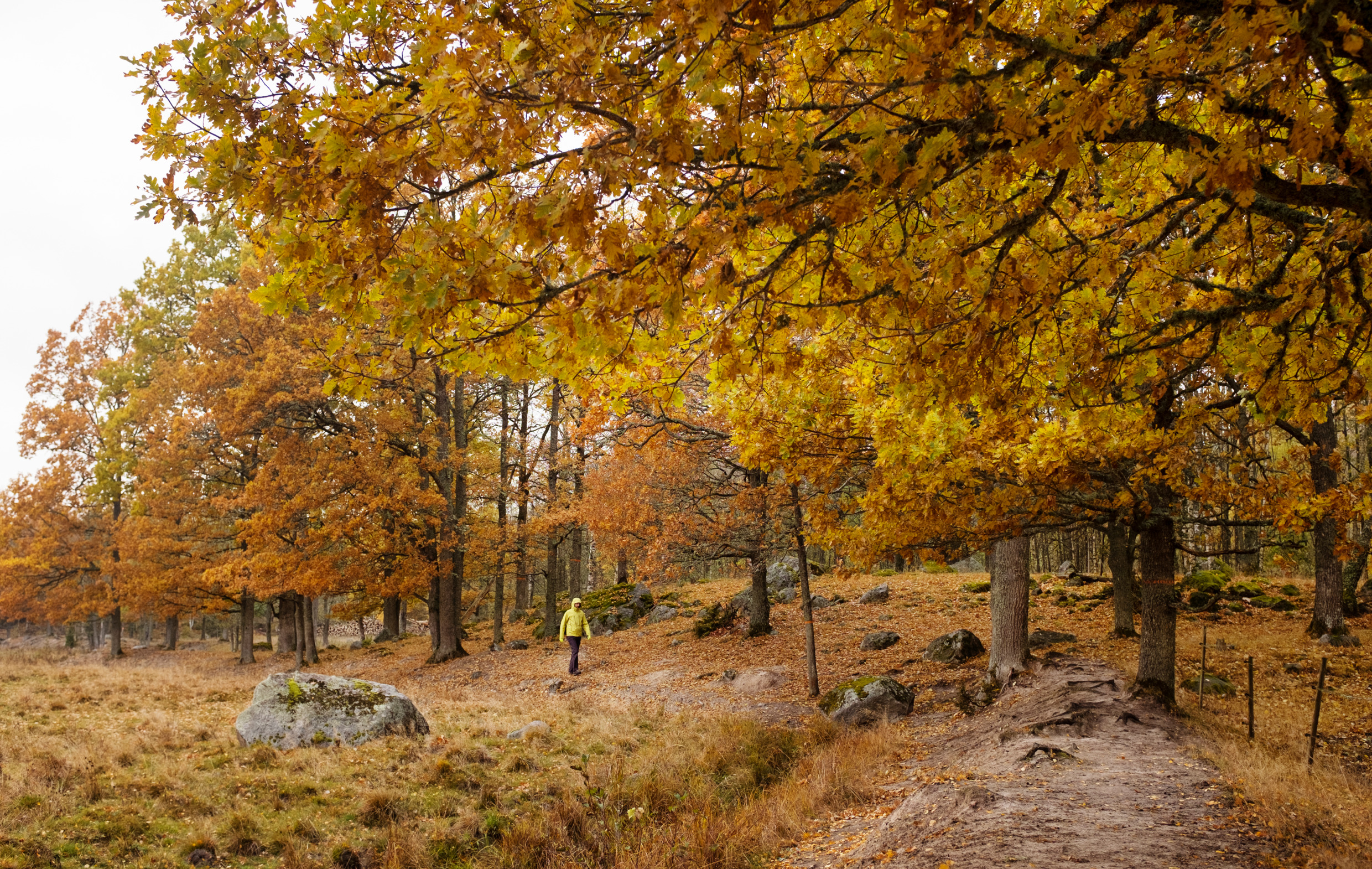 When we were done, Kent, who began his working life as an electrician and still does all Treehotel's electrical maintenance, asked: "Would you like to see where it all began, where the idea for Treehotel came from? We have to drive further into the forest to see it, but it's not far from here, if you've the time".

Oh yes, I said. For that, I've time aplenty

We drove into the forest past thick stands of Scots pine and Norway spruce, then hoofed through a meadow rife with blueberries and lingonberries to the base of a ladder so high it wouldn't have been out of place in a circus. It rose to meet a square, timber-clad tree house, with an inclined roof and tiny balcony.

This was the very tree house filmmaker Jonas Augustsén had built in 2008 when he came here to make his documentary The Tree Lover, about three men from the city who rediscovered their love of trees and of nature through the building of a tree house. Augustsén wanted to remind us of the importance of trees, to help teach us how to reconnect with them. "When I came here and saw this", Kent said, "I knew what we had to do". 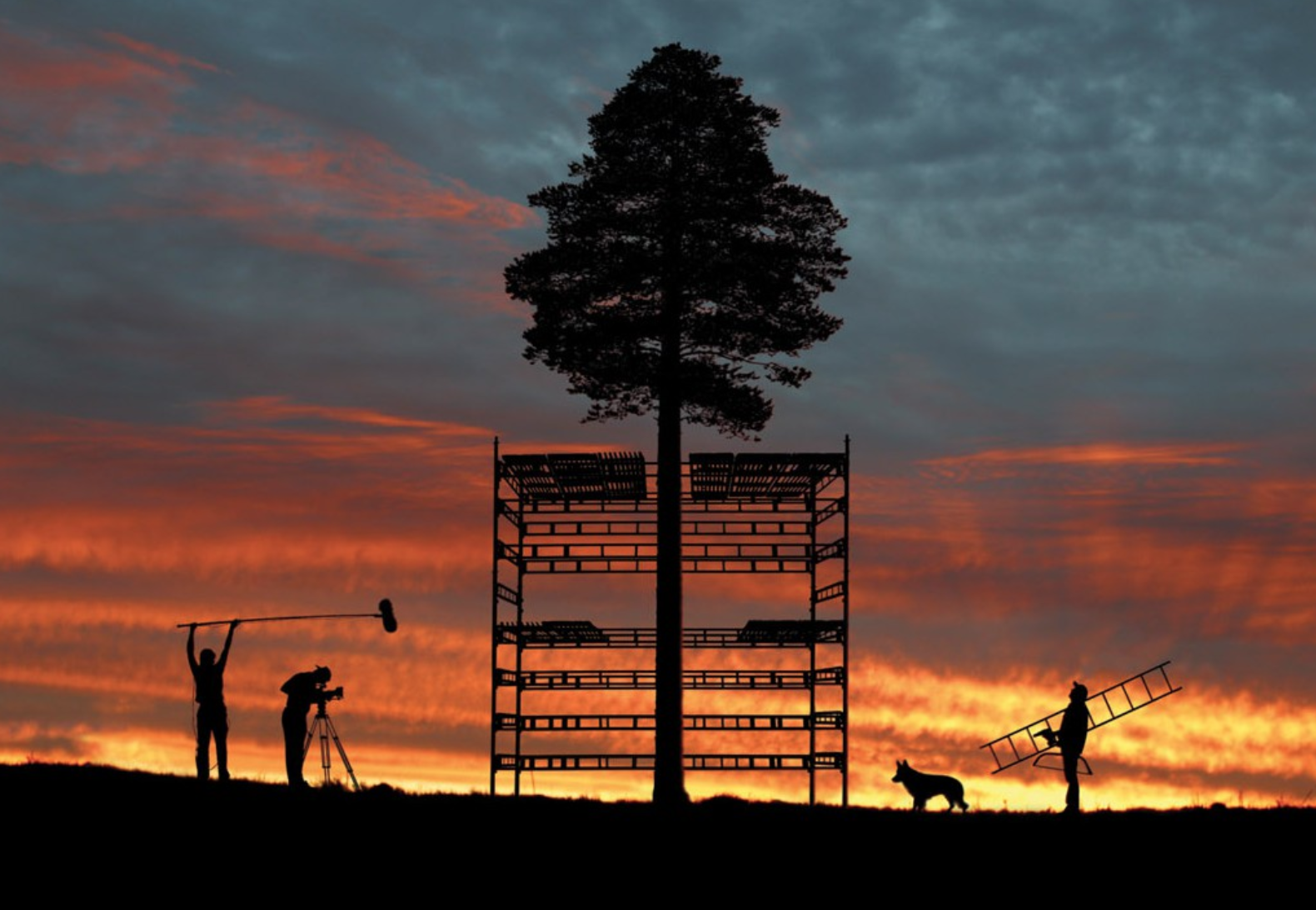 Four hours by train north of Stockholm just below the Arctic Circle, Treehotel opened in 2010. There are seven 'pods' in all - The Bird's Nest, The 7th Room, The Cabin, The Mirrorcube, The UFO, The Dragonfly and The Blue Cone - all four to six metres above the ground, all designed by different architects to avoid any hint of repetition. 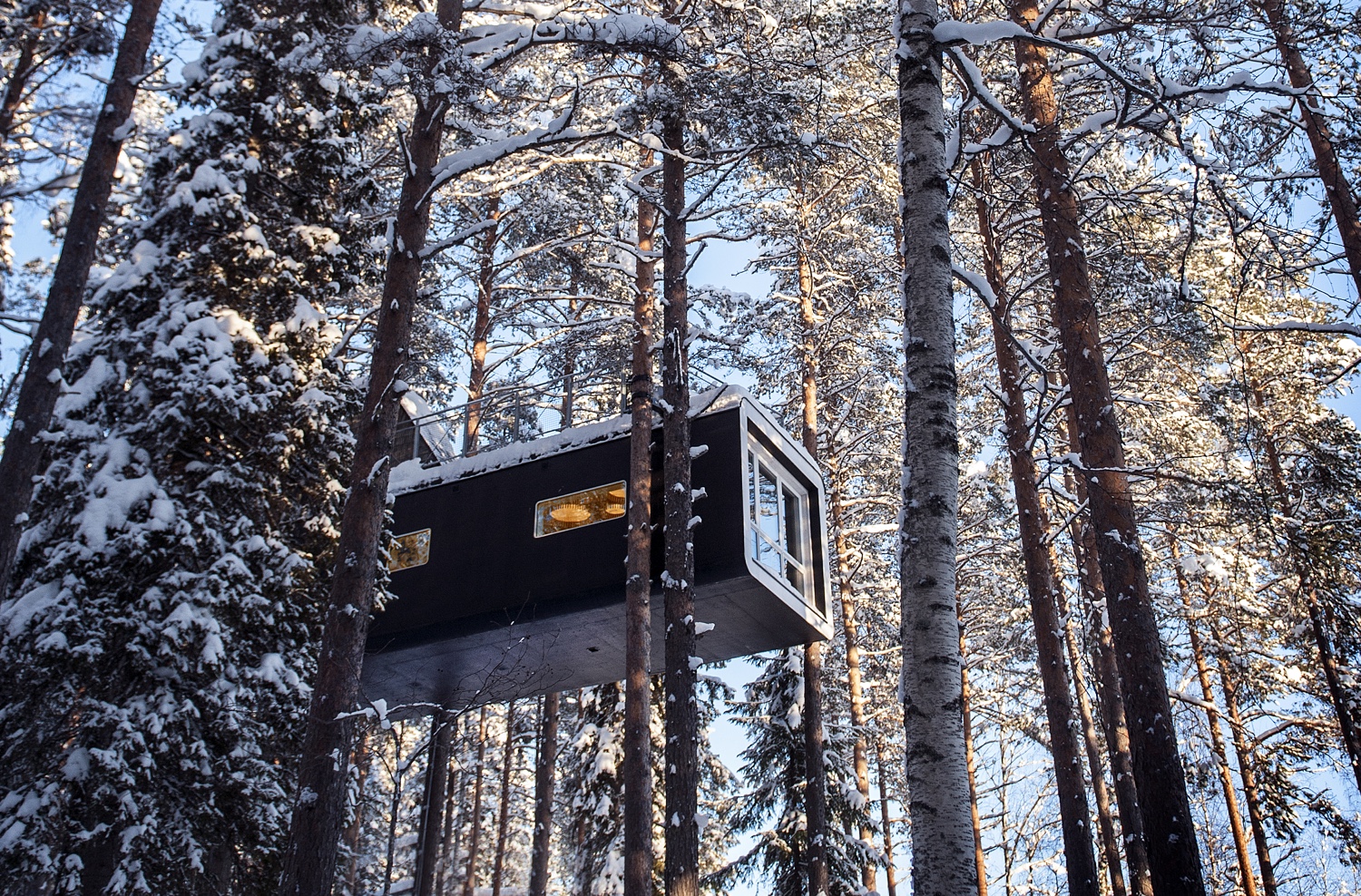 The Bird Cage has an exterior of twigs and branches and was inspired by sea eagle's nests Kent had seen while salmon fishing in eastern Siberia. Mirrorcube measures 4x4x4 metres and is clad in reflective glass. The Cabin's roof doubles as an outdoor terrace. The 7th Room has a rope verandah. Dragonfly even has an optional conference room.

All are accessed by a mix of staircases, ramps, descending manual and mechanised ladders, and rope bridges. Their toilets burn waste into ashes, their coffees are posh, their floors heated, their lights low energy LED's. Interiors are filled with Scandinavian-designed furniture. Once inside, the sense of solitude is tangible. Not for a moment do you forget where you are. And when the wind blows, the trees move. You . . . move. 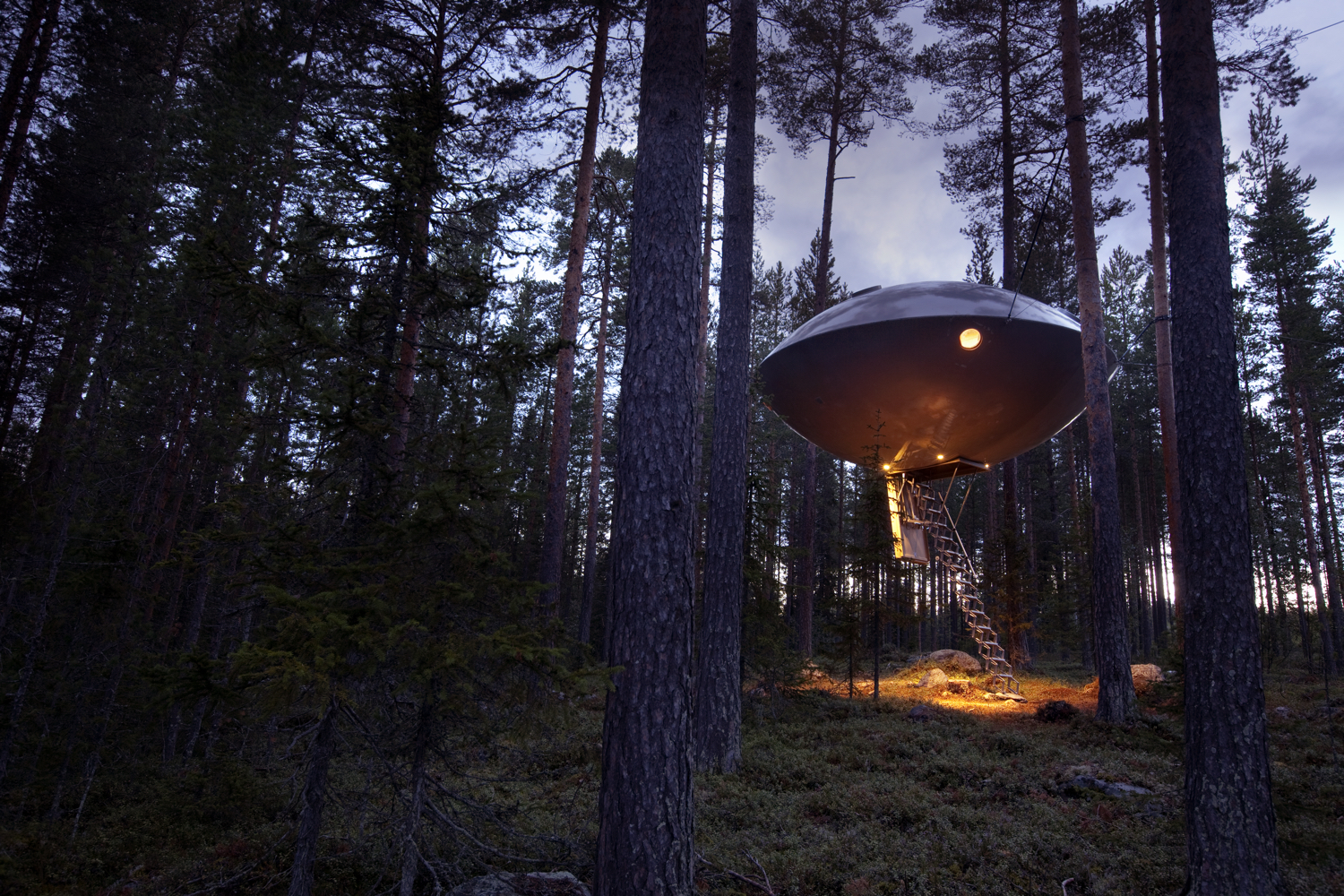 When Kent and partner Britta first came to the small town of Harads they purchased the derelict shell of a 1940's retirement home, a Pensionat, and gave it new life as a guesthouse. Now it is also Treehotel's reception and restaurant, and a 400 metre-long path leads from it to the edge of their 21st Century pod-filled forest, a path that fills you with an Alice in Wonderland-like sense of expectation and wonder.

Meals are taken in the Pensionat and are cooked by Britta and Sebastian, a local chef who dislikes big restaurants and is at home with Treehotel's philosophy of unpretentious hospitality. On the menu you'll find moose stew with baked potatoes, and Arctic Char, which is like Atlantic salmon. Only better.

You don't want to be late for any meal here, although it has happened. A few weeks earlier a Japanese guest rang reception to say she couldn't descend her pod because some 'sheep' were milling about beneath it, and she was afraid to come down. Actually, they were reindeer. Herds around here can number in the hundreds. 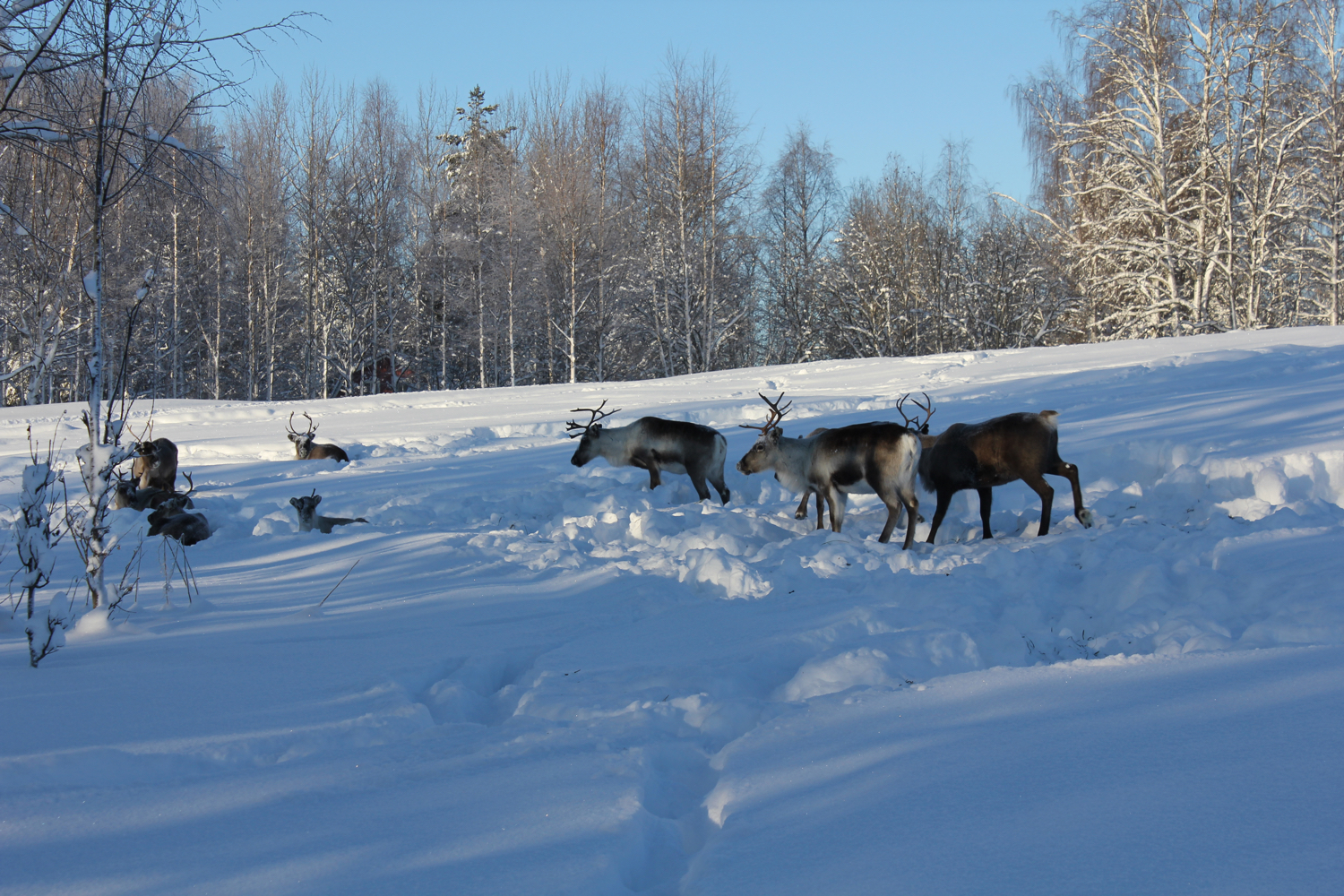 The Cabin, high in a canopy of 100 year-old pines is the first pod you see, and it stops you in your tracks. I couldn't help but feel privileged. Privileged because, thanks to some unheard-of bookings quirk, it would be two days until the next guests arrived. I looked down at the key in my palm. "Here", Kent had told me, "you might as well take the master key. We don't have any guests til Thursday. Stay in whichever pods you like".

Seven pods, two nights. What a cruel piece of arithmetic.

I was so primed for this place. When I was 8 years old I built a tree house in my dad's apricot tree. It had three levels and was made mostly from fence planks and old wooden beams, with hessian bags for doors, a flat roof you could sit on, and held together by nails. Hundreds of nails. A year later, when the tree began to prematurely wither, we all blamed the nails. I've always felt bad about that. I loved that old tree.

You won't find any nails in the trunks or branches at Treehotel. Pods are held aloft by a combination of slender steel posts and multiple trunk-hugging adjustable brackets that can be made larger as the trees grow. 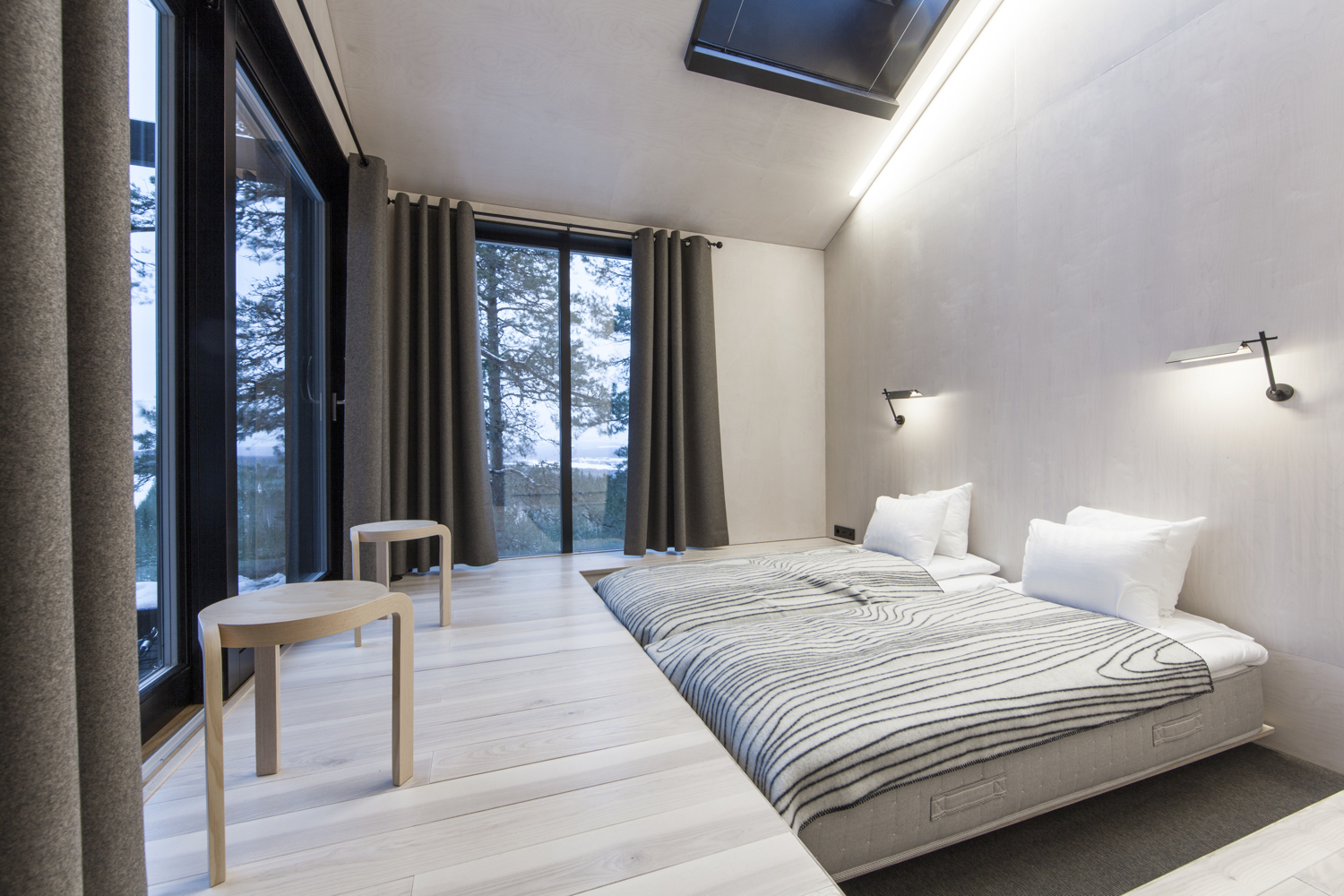 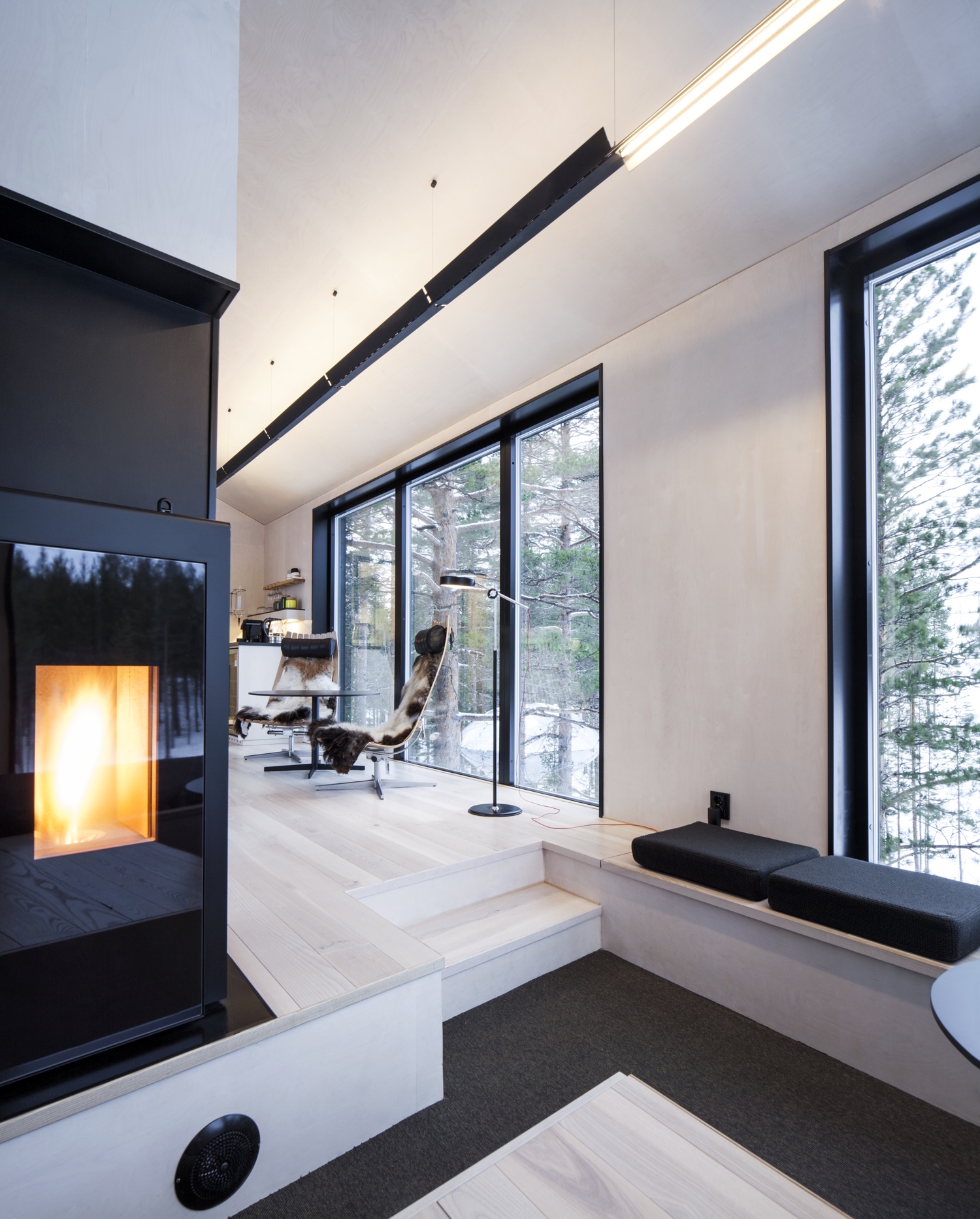 Snooping around the Pensionat on my last day I uncovered some drawings for a new project - "Arctic Bath" - a spa on the Lule River that will float in summer and freeze into place in winter, its central bath "heated" to four degrees to keep it from freezing and its exterior clad in a riotous display of real logs, reminiscent of a 'log-jam' on this old logging river.

Skimming through the drawings taking photos I felt like a Cold War spy (Well, why not? The Lule River was once a defensive line against a feared Russian invasion). Arctic Bath is another testimony to Kent and Britta's on-going lesson in how inspiring architecture can soften humankind's encroachment into the realm of nature.

Article written by Barry Stone, who travelled extensively with us, September 2019. Thanks Barry!

Find our range of Swedish holidays staying at the Treehotel here. 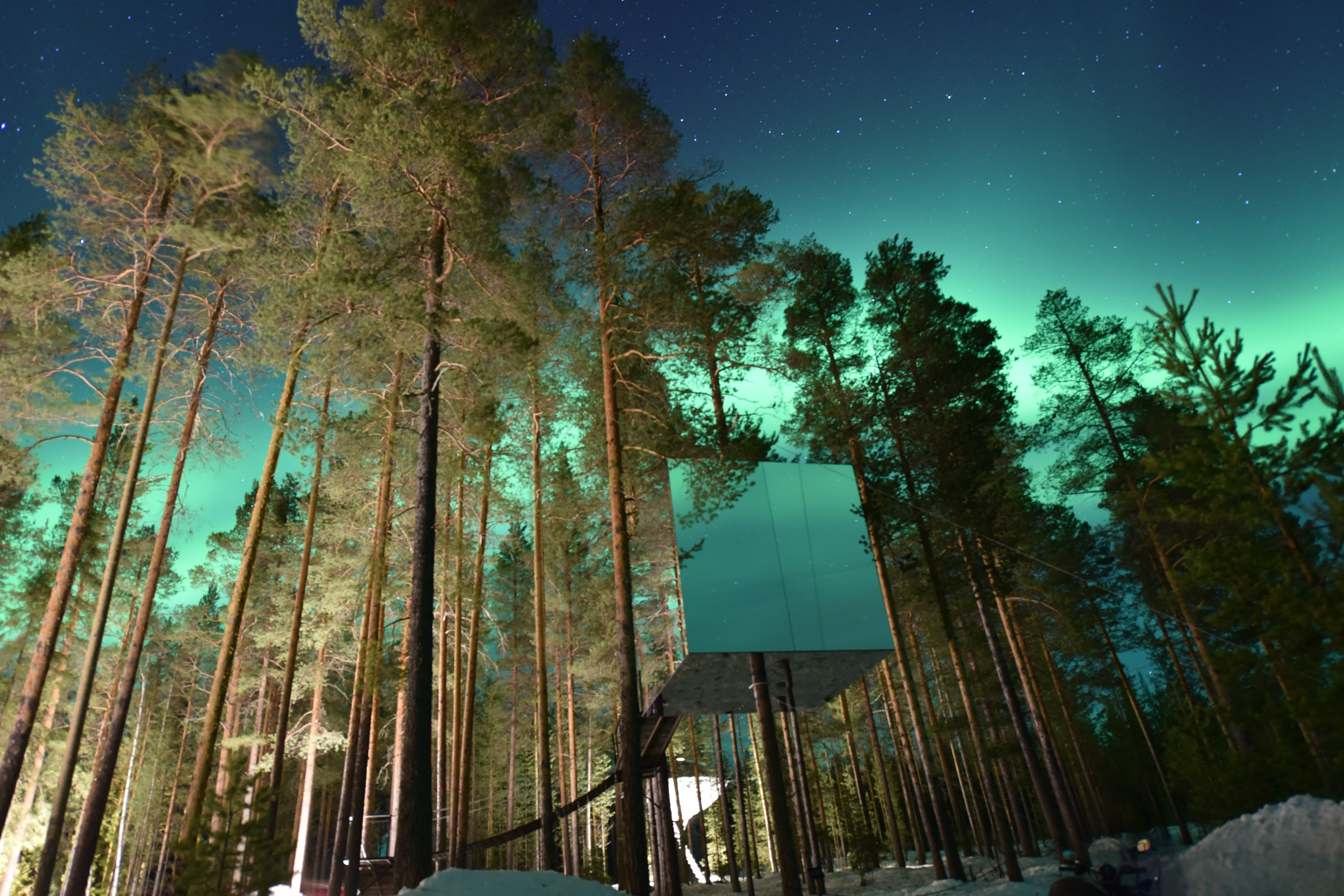