Our guest blogger, Berenice shares her insight into the excursions on offer during your Hurtigruten Voyage.

On board all of the HURTIGRUTEN coastal voyages, apart from the obvious activities and excitement surrounding the delivery of goods and services along the Norwegian coastline, passengers are provided numerous extra surprises and excursions mostly at an extra cost, organised by the Entertainment officer. These excursions are numerous and differ on the northbound journeys compared to what is offered on the southbound journeys.

We were on the North bound Hurtigruten voyage and our first chosen excursion was the Geiranger Fjord with Trollstigen Pass. This trip encompassed a drive up Eagle road (Ørneveien) offering great views, passing magnificent waterfalls, lots of snow, pristine lakes, 11 hairpin bends and a ferry ride. It was a great day and culminated in dinner in Molde where we started to gather a circle of newfound friends from around the world! 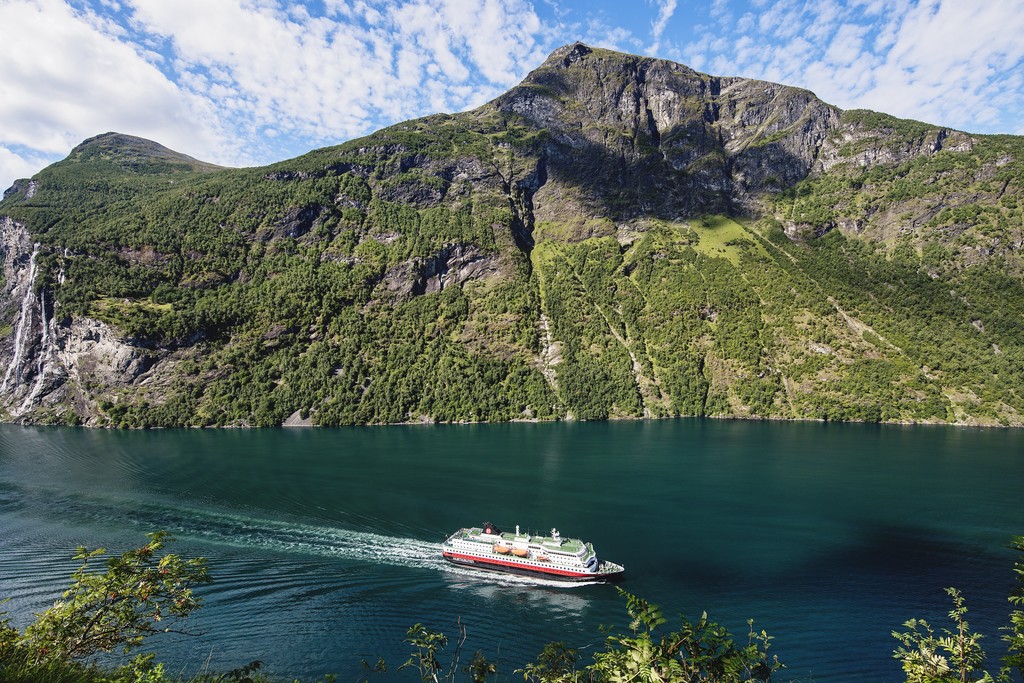 Our first trip ashore, offered to all was to the city of Trondheim. This, I believe, is the third largest and second oldest city in Norway and is also known as Norway’s Viking capital. It has a cathedral and museum but we were happy to wander around the streets, the fabulous market, searching for the fish market, checking out the old bridge and numerous canals-like structures. 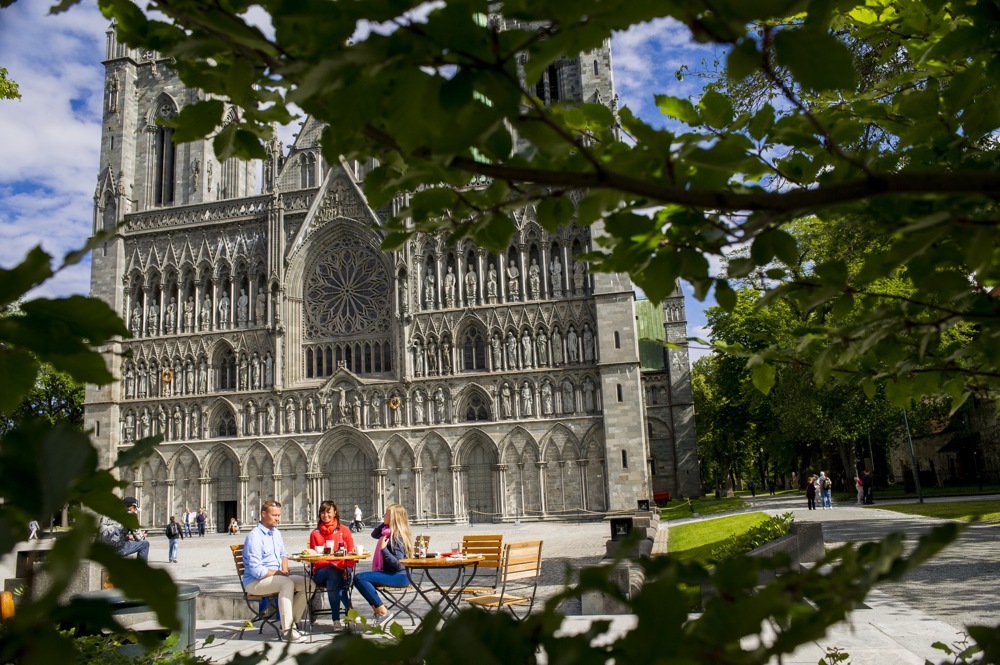 During dinner that night we were lucky to pick up an announcement about a "Mountain with a hole through it (Torghatten)" which we were scheduled to pass about midnight. My husband, John was not going to miss this so up we stayed on deck with scores of others all armed with cameras ranging from ours (our iPhone) to the marvelous but it was, indeed, a sight well worth waiting up for. With the misty midnight light, it was a strange, weird and eerie experience and for those who waited up a little longer than us, you could see it all again from the other side.... as the MS Nordlys pulled into another little village to drop the mail about 2 am. 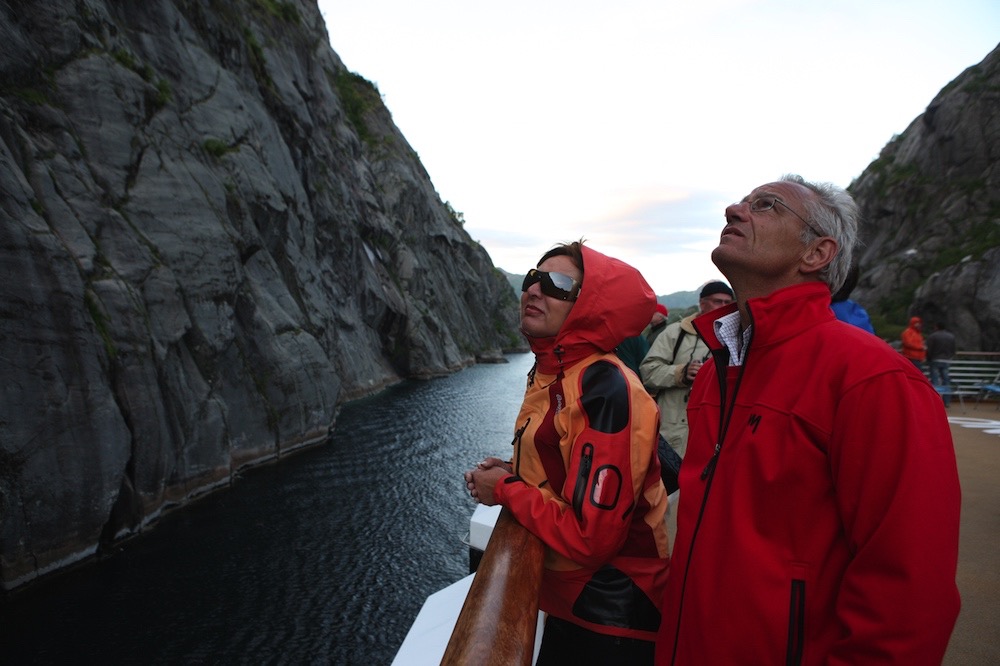 The next morning King Neptune came on board to help us celebrate the crossing over of the Arctic circle and those passengers brave enough to have a heap of ice put down their backs, did. They were rewarded with a glass of schnapps and lots of their photos taken. This included John! The rest of us kept well back but got lots of laughs. It was very funny to watch, indeed.

That afternoon, with a group of new friends we embarked on another tour, The Rib Safari. This trip was with an experienced pilot (we hoped) on a "mostly" sturdy rubber boat and we were well rugged up thankfully because he, the pilot, did like to give us a thrill or two over the waves whilst journeying out to the Saltstraumen. It was fun but I certainly kept a good grip on the handle in front of me. I even managed to lose my glasses overboard. Enough said! At Saltstraumen we were to witness the worlds' most powerful tidal currents creating whirlpools and rips up to 4 times a day. Of course we had to go over most of them, what else? We were also lucky enough to see quite a few sea eagles in their natural habitat and the Caledonian Fold Belt, a range of mountains dating back over 250 million years, altogether a rare adventure!

That evening, our next chosen excursion was to a Viking Feast in Lofoten. We had an informative bus drive between Stamsund and Svolvaer with beautiful countryside. On arrival, we had time to explore the largest Viking Building Lofotr ever found which has been painstakingly recreated and exhibits finds from the Viking era. We were invited to join the Chieftain, his lady and daughter, on the prowl for a suitable husband (which added another side to the entertainment..... She didn't like any of the males present) for what appeared to be an almost authentic Viking meal, i.e. no knives and forks! A dagger was upright in the meat (lamb) and a roughly cut spoon was on the rugged table. I was initially doubtful but I really enjoyed the warm, home brewed mead and had a second! We joined the Viking family for a song and dance around the fireplace before we had to rush back to catch the boat. We would have liked more time to appreciate the evening but the schedule is tight to fit into the port schedules. 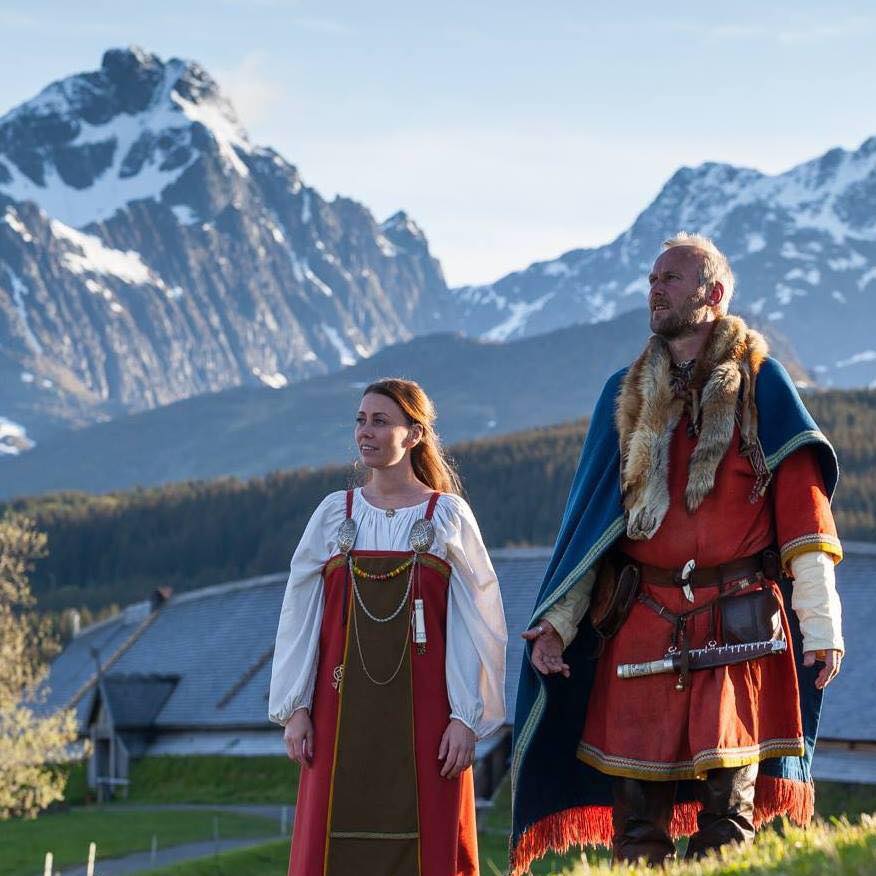 By the time we returned to the MS Nordlys we had missed out on an announcement in regard to another great view later that night. It involved a tight Trollfjord fjord experience whilst dropping off mail.... a lot of tight turning, reversing and almost being able to touch the side of the mountain and we slept through it, totally oblivious to our friends out on deck! **Be sure to find out if you have missed any announcements when you reboard if you can.

We chose to do our own trip around Tromsø the next morning. John’s quote was "all day with nothing that you had to do and all day to do it". This not often happens in our lives! We spent a lazy day with our new travelling friends, Paul and Maree catching the local buses to see and do the cable car, the church, a stroll through the centre and then we found a groovy, popular little bar, come theatrette which was hosting a film festival. There we found our entertainment officer!

The next day we joined the crowds on another of our chose excursion to the North Cape
.... 5 buses in all proving its popularity. This journey commenced in Honningsvag and our leader was very informative...telling us information about the local industries such as tourism & fishing, the King Crab affects on this industry & reindeer farming. We heard that there were lots of reindeer, about 5000, roaming the hillsides – we saw some of these during our tour. The Cape marks the northern most corner of the European mainland and like most of the others we jostled to get our GLOBE pictures. This has become a symbol of the North Cape. John had one taken of him holding it in his hands. 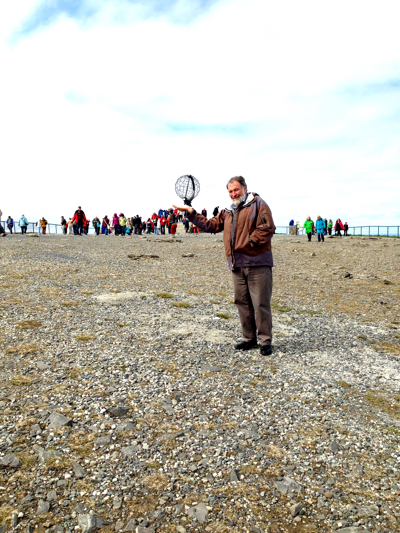 During the late afternoon, I just happened to see a few people rushing out onto deck 5. Of course I investigated and discovered a most amazing, full rainbow disappearing into the sea at both ends. I rushed back and alerted our friends and we all managed to get some great shots! The sea became a little rough later and some succumbed to feeling ill but not us luckily because it was a seafood banquet including lots and lots of KING CRAB. On our arrival at Kirkenes we were whisked off to our chosen crabbing adventure. The MS Nordlys has other excursions but luckily 50 Degrees North had this one organized for us personally. Getting into our gear was a sight to behold, particularly, with John trying to put his leg in the armhole! We saw sea eagles, little whales, German bunkers from WW2 and found two King Crabs. Then back to their delightful little shack, come restaurant, to kill, clean and cook them. We, of course couldn't eat all of our meal because of the quantity we had eaten the night before. You can't help bad luck? How many King Crabs can one person eat in a day?

Like they did on our arrival into Bergen, with a hotel on the water overlooking the magnificent Bergen harbour, 50 Degrees North had booked us into The Thon hotel with a view over the Kirkenes harbour for our last night in Norway. It was a fantastic place and our group of friends, departing with us, had dinner there with us that night. What a way, both to arrive and to leave Norway. Memories forever!